Asad Zulfahri: ‘This is, bar none, the best coliving space ever’ 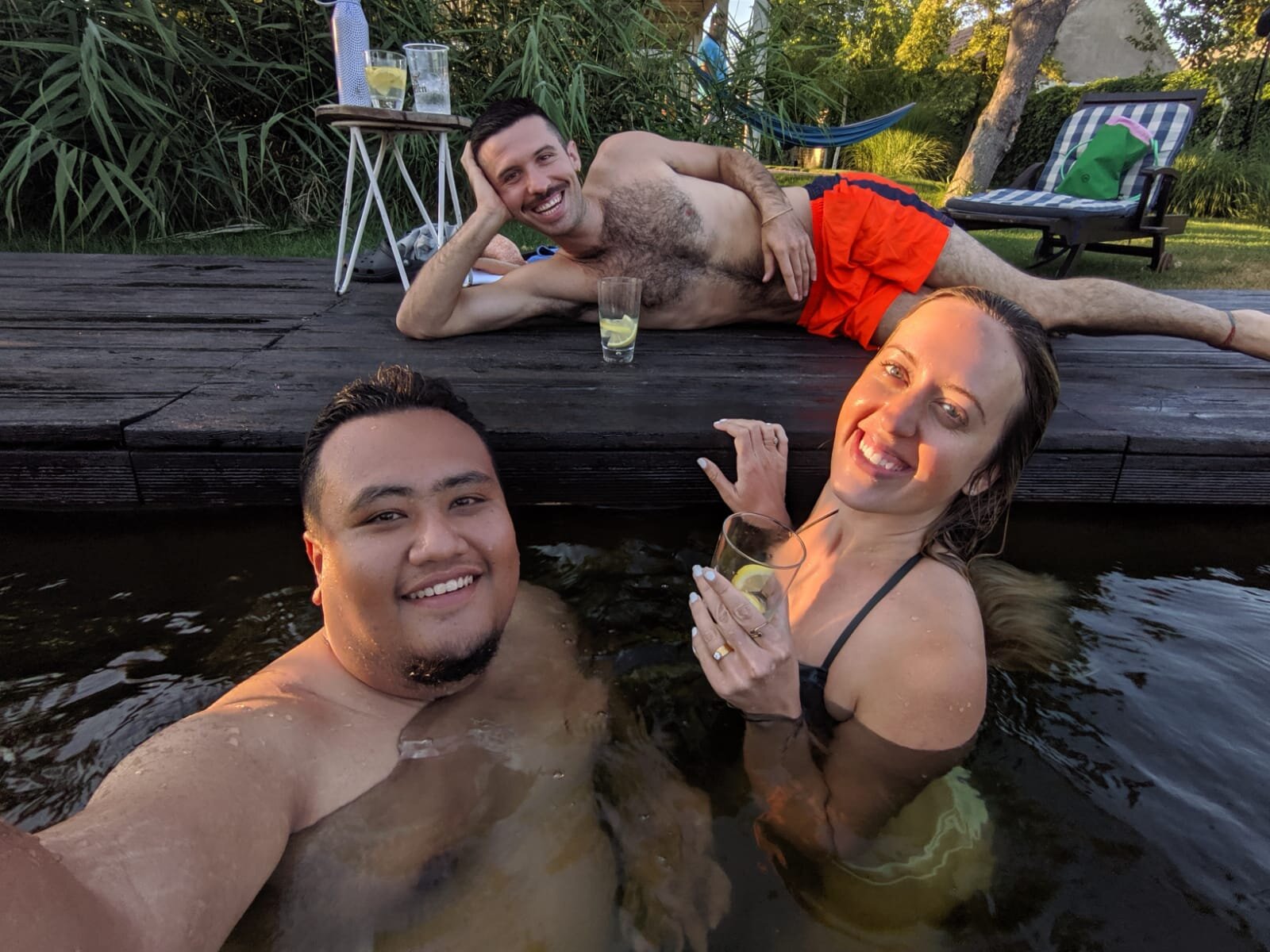 You ever make new friends really quick that are so fun to be around but wonder how the universe pulled together such an odd bunch? It must be the charm of Mokrin House 💜

Almost three years ago, I was traveling with WeRoam (which is now defunct), and heard that they were going to do a side trip to Serbia. I was interested in going to Serbia, but I didn’t want to travel the group anymore so I left early. Through my network of other digital nomads, I had heard about Mokrin House, a different kind of co-living, co-working space in the north of Serbia. I decided to check it out, so I booked a month-long stay there.

Mokrin House is a really special place, and it’s unlike anything else I’ve encountered in my travels. After traveling to more than 30 countries and 150 cities around the world, I’m back to Serbia specifically to revisit Mokrin House. So I thought it would be a good time to share what it’s like to stay there, and why I’ve enjoyed it so much.

Mokrin House is a very modern-feeling getaway in a rural area near the village of Mokrin, Serbia. The village was founded as one of the stations of the Orient Express, the luxury train that traveled from Paris to Istanbul. In spite of this claim to fame, the area still feels pretty remote. But it’s not hard to get to Mokrin. There are three major airports within two hours, in Budapest, Belgrade and Timisoara, Romania.

The founders of Mokrin House chose the remote setting so that people could go there to get out of their regular work environment, to be more productive and creative. That’s a big part of the reason why I like going there – it’s away from everything else, and I feel like being there really lets me focus on certain projects.

Once you are there, you have your own room as you would in a hotel or Airbnb – unless you opt for one of their dorm rooms. Mokrin House has its own co-working space, gym, pool, library, outdoor spaces, a farm and common areas where you can read, drink coffee or talk to people. Also, an underground bunker/bar which is mostly used as a small event space. When you stay there, it includes three meals a day which are cooked for you by an in-house chef.

They Take Care of Everything

When you have someone making breakfast, lunch, and dinner for you every day you feel like you have your own concierge! All you have to do is wake up and go to work.

In addition to meals, staying at Mokrin House includes housekeeping and EUR 5 if you need laundry. They even make the bed for you every day if you wish. It’s so nice being here because you can just skip all the daily routines that you don’t like. I like to cook, but I don’t clean. I like doing laundry, but I don’t like to wait for it to dry out and fold ’em. But I don’t have to worry about any of that while I’m here!

So many aspects of life here are just so much easier. If you ever want something to drink, you can just order it from the staff. You don’t even have to deal with a bill right then, they will just charge it to your room. And that’s available every day from 8 a.m. to Midnight. And if you’re really nice, and I mean sincerely, you do get some perks on the house 😉

All of these services can actually be a little dangerous because once you get used to it it can be hard to go back to the real world!

As you can probably imagine, a place that is as special and unusual as Mokrin House attracts a mix of really cool people. We are all here to live and work side-by-side, so it’s a great place to connect and share ideas. I’ve met freelancers, entrepreneurs, and influencers. You have the chance to socialize and network with these people and it’s really awesome.

So far I’ve met people like Erin who is a marketing consultant that help brands communicate better with their customers to both increase sales and leads while growing their business. She consults with not-typical companies, like cannabis companies and those in the adult industry.

Brandon is an amazing artist and poet who is going to publish a book soon. He also writes and produces songs. The three of us just connected, and have had a great time hanging out.

Novak is a Serbian national who lives in Novi Sad. He’s a freelance writer and cybersecurity expert which explains the lack of social presence, except for Twitter of course.

I also met Sofija who is also a Serbian national and is currently looking to venture into the Marketing industry. She’s currently writing her master’s thesis on disruptive technologies and I’m looking forward to reading it soon!

Sometimes it is hard to find people you connect with, but at Mokrin House it’s been easy for me. I’ve met people here with whom I have both personal and professional things in common. For me, the professional connection is so valuable because sometimes you want to vent, and it’s better to do that with people who understand your work. These kinds of friends are forever. 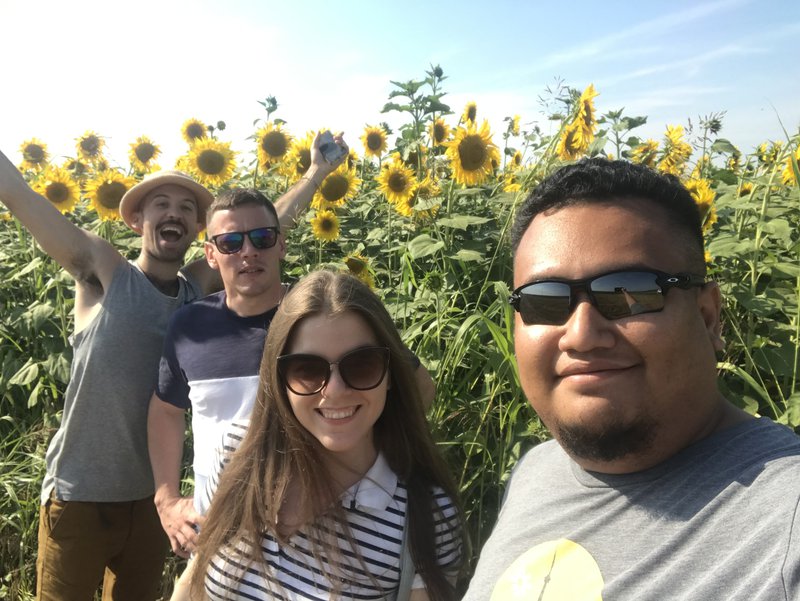 Part of the Community

Along with getting to meet interesting digital nomads and entrepreneurs, I have also really enjoyed getting to know the staff at Mokrin House and the locals.

The team at Mokrin House has done a really good job of educating the surrounding community about its purpose and the digital nomad lifestyle. Because it’s in a small village, people here have sometimes been confused when they see foreigners coming in and staying for weeks or months at a time. People don’t always understand how someone can live at Mokrin House and still work and make money. Even though it is remote, Mokrin House does not separate itself from the community. Hosting public events like movie nights, weekend picnics, embroidery workshops, concerts, and allowing locals free use of the co-working space helps bridge the cultural divide.

Since I’ve been here, it’s been really interesting to get to know more about how Serbian people are. They are pretty practical and very nice. They are not always trying to be as diplomatic as some other cultures, but I find that refreshing. I have also found the people here tend to live a simple life. Average salaries are not high – some people live off of 200 to 300 euros per month. But people seem content with their lives here and are very good-natured about it.

The staff here is really awesome, and they are great at hospitality. The first time I came was 2 years ago and I booked one of the cheaper rooms. But when I arrived, there were not a lot of people there because it was the end of the season. So they just gave me an upgraded “comfort” room for no extra charge. I thought that was a really nice touch from a customer service perspective.

One interesting thing about Mokrin House is that, unlike most hotels and rentals, you don’t have to pay anything upfront. It costs around 2,000 euros per month for the most luxurious room, and I usually rack up a tab of about 300 euros in extras when I’m there. I like that you pay your entire bill when you leave because digital nomads are often dealing with different currencies, so it is easier to handle the bill after than before. This worked out well for me right now because I am going through a transition. I came here when I had just canceled all my freelancing contracts. Being here gave me at least a month of a financial buffer. Working late at night? No problem. The co-working space is literally 30 seconds away and available 24/7.

Also, I learned this year that if you have a U.S. visa, you can use it to come to Serbia. For me, that made this visit easier. I extended my trip to six weeks because I have a lot of shit to do, and I know this is a good place to focus on things that really matter. I like that it’s a single compound with everything you need right here. It’s a very good place to work, be creative and be productive without any distractions.

One of the reasons I decided to come back to Mokrin when I did was because it was my birthday recently (no I won’t tell you when it was!) and I wanted to lay low. I actually didn’t plan on telling anyone, but the staff found out because they had my passport. 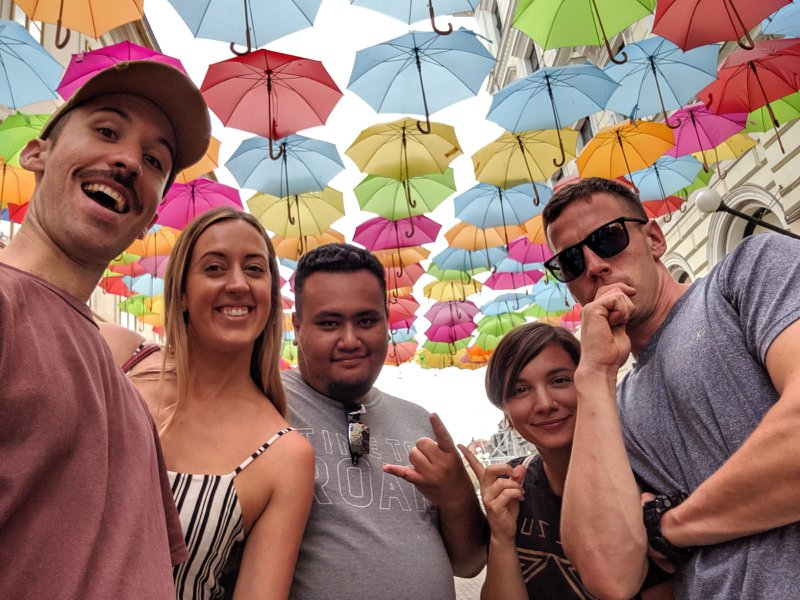 From the left; Brandon, Erin, Asad (myself), Tamara, Nikola; Photo by Brandon

Nikola and Tamara asked me what I wanted to do for my birthday. I said I wanted to go to McDonald’s, so we decided to go to across the border into Timisoara, Romania for the day, which is only a 90-minute drive from Mokrin. 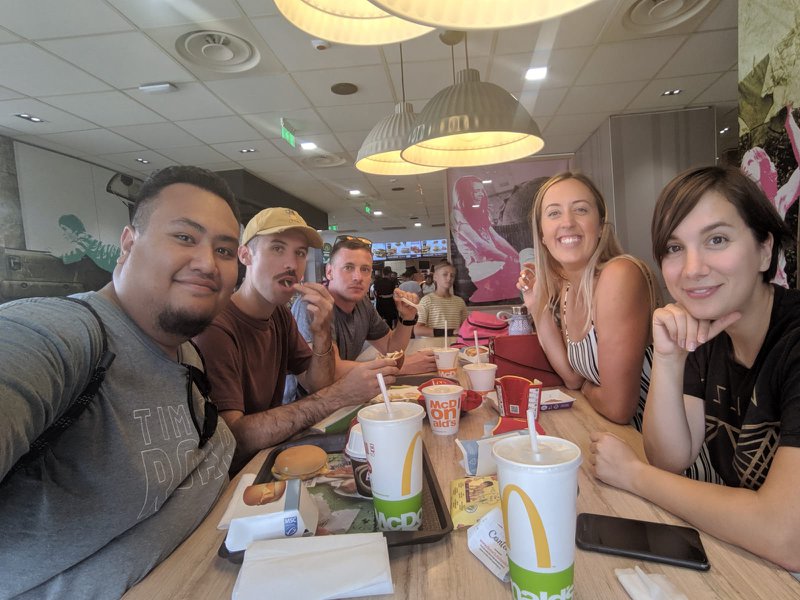 Lunch at McDonald’s in Timisoara, Romania!

We drove there in the morning and had lunch in the McDonald’s. It was fun, even though they ran out of Coke, which was unexpected! That location had run out of all their sodas, which was too bad. Then we had some shisha, watched Spider-Man: Far from Home and then we went go-carting. It was a really fun day, just a nice adventure and good times with interesting people.

I also bought a communal guitar for Mokrin House in honor of my birthday, but that part of the story had a slight bump in the road. There was an incident and the top part of the fretboard basically broke in half. Sometimes you have to choose between saving the guitar and the Macbook. I went with the Macbook because obviously I can’t work without that! It’s OK though, I think we are going to try to get the guitar fixed.

As you can see, I have really enjoyed both my visits to Mokrin House. I am sure this won’t be my last time here! If you have any questions about Mokrin, or about the digital nomad lifestyle, let me know in the comments. I’m always happy to answer them!